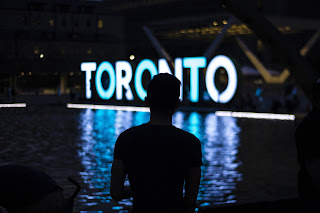 Why hey there, long time no speak.

Next week, along with being my 3 year 10 months self harm free anniversary, marks my second month in Toronto. Bizarre as it seems, as I feel like I've been here forever, two months ago on November 11th I was boarding a plane from Gatwick hoping for nothing more than a peaceful flight and an ungodly amount of free snacks.

Bro tip, fly with www.canadianaffair.com, they have good free shit.

People keep asking me how I'm finding it here and, honestly, I haven't quite decided. It's not the cold or the cost of the city, that I was expecting, but more how I've felt since I've been here.

Side note, this is the last winter I will ever spend in the Northern hemisphere, I physically, emotionally and mentally can not handle another year of fighting with my seasonal affective disorder. Fun panic attacks and suicidal thoughts are not.

Anyway, back to Toronto. Moving here was supposed to be a fresh start but, as a particularly cute fuck boy managed to work out within hours of meeting me, in reality I was running away.

I still don't want to use your face as a chair though, sorry bro.

For some deluded reason, I thought I would be different here, that I would miraculously leave who I was behind and emerge, phoenix like, from the ashes as a stable and sane functioning member of society. Turns out, I'm feeling more River Phoenix than anything else.

Don't get me wrong, for the most part it's been great. The hostel I've been staying in, Planet Traveller, is amazing and I've met some really great people and happily fallen into a mish-mash of people from all over the globe I affectionately call my orphan family. I just didn't expect to be living the exact same life I was living back home, just with different accents and reasons to apologize.

So far I'm planning on staying in Toronto for six months, after that I'll pick a new city and spend the summer there. There's no chance in hell I'm going back to England, but I'm not keen on the idea of staying in one place for too long either.

Now, if you'll excuse me, I'm off to listen to River Phoenix in true tortured Millenial style and plan my next trip.