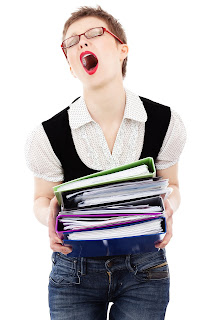 As both a writer and a Millenial, you'd be correct in assuming that I've sent out my fair share of job applications in my time. From my very first waitressing job at 16, to which I showed up on my first day hanging out of my eyeballs with the goal of providing a bride with the dinner service she'd dreamed of since she was a little girl, to the video I once made in an attempt to enhance the application I'd sent just so I could have a vague shred of styling assistant experience on my CV. If it sounds like it sits just on the believable side of bullshit, then I've probably done it.

Today, however, I am going to revisit those past applications. Delve through my employment history if you will, and see if I can work out where the truth really lies.

Statement number 1: I work well in a team

This is one you have to say you're good at, otherwise, you sound like either a total bitch or someone totally void of all understanding of social queues. Whilst it has graced the pages of many an application penned by my fine hands, what it should really say is "Works well in a team providing people do things to my standards". I don't give a shit if we have different opinions, voice them, fight with me, it's what I want. Just don't sit around half-assed doing something because you assume someone else will pick up the slack for you, or I will fantasise about castrating you with my craft scissors.

I came to realise that I was done lying about this one last night when I finally accepted that yes, I'm fucking highly strung, but that's not necessarily a bad thing. I may be dramatic and become tense easily, but that's only because I care and want to do my best no matter what the situation. Whether I'm making coffee or writing copy, I always need to put 100% in in order to feel happy with my performance, it's just who I am.

What is not helpful in these situations, however, is telling me I get stressed. No shit Sherlock, I'd kind of already noticed. All you're doing by telling me this is making me paranoid which is just going to make me more uncomfortable. Take a step back and let me get on with things and we'll all be right as rain.

Of all the problems I have within working environments, this one is the most deeply ingrained and, so it would appear, the hardest for me to work on. When I was a kid, I was shouted at a lot. Repeatedly told that I was a bad person, that I was rude, mean and hurtful and all in all feeling like I was wrong. As a result of this I always, always, feel like I'm going to be told off, like a child. You know in Pretty Woman when Vivian says that if people put you down enough you start to believe them? This is me.  Since then everything has changed and I have an amazing relationship with my mum and her boyfriend, but the feeling like I'm going to be told off is still there.

Seriously, when I first met my previous landlady, who I LOVE, I was convinced she was going to tell me I'd done something wrong, despite the fact that we had only just met.

Now I 100% know that this is something I need to work on, no one else is going to get me through this. But when I'm having a panic attack because I've made a mistake at work and feel like I'm going to be fired or shouted at, it really gets me down. It's not so much that I have a problem with authority, it's that I'm fucking petrified of it.

This one is actually true, but not in the way I think it means. When I say that I'm a self-starter, I mean that I just like to get on with things. If I'm working and something needs to be done, it'll be added to my list and I'll do it. I have no time for waiting around just because it might not 100% be within my job description, if I can do it and it needs to be done, I'll just get on with it. This one goes hand in hand with the whole "works well independently" thing. I do work well by myself, but mostly because I like to be left the fuck alone.

Fun fact, throughout all the time I've spent completing job applications over the past 4 months, I've spent a considerable amount of time googling synonyms for the word stubborn. Tenacious, determined, strong-willed, every bs term I could possibly find that boils down to one thing, I'm stubborn. I'm really stubborn, but unfortunately, in some situations, this just isn't considered to be a good thing. However, as I realise how much time, energy and stress I've put into finding employment over the past x or so years, I can now see that my stubbornness is really quite a good thing. Would I have been able to put the man who raped me in prison were I not stubborn as an ox? No. Would I have completed my degree while simultaneously putting said man in prison, self-harming harming, learning to live with an incurable mental illness and dealing with the death of a good friend? Also no. So fuck it, I'm stubborn and you know what? I'm happy this way.