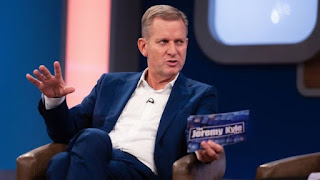 As any self-respecting British person will have become aware of over the past two days, the iconic Jeremy Kyle show has been taken off the air after over a decade. A cornerstone of anyone's daytime TV schedule, the show has been cancelled after the death of a guest that failed a lie detector test.

So far there has been little to no reports on how he died but, as far as I can see, only one UK platform has suggested that the person in question took his own life.

The publication I refer to is the Metro, so don't get too excited.

Discussing the incident with a friend last night, what I didn't realise was that prior to appearing on television programmes such as Jeremy Kyle, guests are often given psychiatric evaluations, in an attempt to ensure their health will not be affected by appearing on the show. Ignoring how I feel about free and informed medical care being given to people whose main concern in life is proving to their ex that they didn't shag their sister, it's important to realise how easy it is to manipulate the results of these tests.

Whilst some people will always believe that people experiencing mental health issues are "faking" and that their problems don't really exist, I can vouch first hand for how easy it is to convince people, even medical professionals, that your health is improving. It's also important to remember that money is, and will always be, a contributing factor towards people's behaviour, and when a large sum of money comes your way, it can be difficult to resist.

What is often glossed over in discussions about mental health problems, is how boring they can be. Yes I know I need to rest and that certain things aren't within my capacity at the moment, but that doesn't mean I don't wish I was able to go out and live a "normal" life. When we're in a desperate situation and want to hold on to normality as much as we can, it's easy to pretend that we're doing okay. I don't mean this in a "Dave hasn't been to the pub this week give him a visit" kind of lie, I mean the kind of lie that allows us to progress through life in ways that we wish we could.

The issue with programmes such as The Jeremy Kyle Show and Love Island, which was suggested to contribute towards the suicide of contestants Mike Thalassitis and Sophie Gradon, is that if you want something badly enough, be it fame, money or success, it's very easy to act as if nothing's wrong. It may be difficult for doctors and psychologists to pick up on cues that might tell them this, particularly due to limited time and resources, but people need to be aware that it happens.

We're humans, if it's one thing we do better than the rest of the food chain, it's lie.