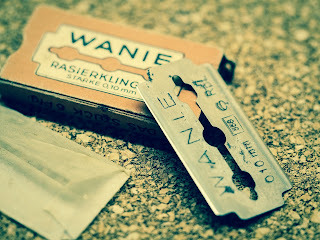 I'd considered not writing this post for fear of upsetting people, but there's not a part of me that can be bothered to lie.

About a month or so ago, I started self-harming again. I was in an inexplicable amount of pain and all I wanted to do was cut my arms, so I did. I could say that I'm ashamed of it, embarrassed by the fact that I'd broken my 4-year streak of being cut free, but I'm just not. I wanted to do it and so I did, and it did exactly what I needed it to do. It made me feel better.

I'm not overly sure how many times I've done it since then but I made a pretty deep cut this morning. I'm fine, it's fine and I have plaster of it so there's no chance of me bleeding everywhere. I know my body and so know the worst of it will be healed in a couple of days and eventually it will be nothing more than a distant memory etched on my arm, along with all the other mornings, afternoons, nights and evenings I've ever spent cutting. Just as I'm doing my best to move on in other situations within my life, my arm will do the same.

Although it may not seem like it, to me this is a part of taking care of what I want and need before I can be involved with anyone else. I've been doing this long enough to know how to not really hurt myself and, if I'm honest, I like doing it. Not in a 'doing it just for funsies' kind of way, but in a 'I know what to do to make myself feel better' kind of way. For as long as I can remember I have been plagued with feelings of guilt, to the point that I have no idea what I'm feeling guilty for anymore. I do, however, know that spending money and drinking make me feel guilty, so the usual retail therapy or drowning my sorrows with a bottle of wine is out, and cutting is in.

I also don't have a freezer, so going balls deep in a pint of ice cream isn't an option either.

This isn't to say I'm going to start doing it on the regular again, that's just not the case. What I am doing, however, is just accepting that this is a part of what's going on with me at the moment, and that's good enough for me.