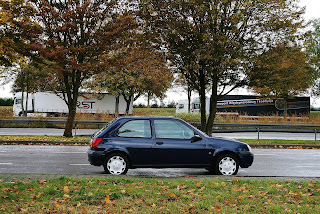 I've been talking to a friend today, one of the only other people I know with BPD, and we've been discussing the idea of self-harm. Not in the traditional way, we're not gabbing about my enjoyment of slashing an arm or two every now and again, but the type of self-harm that doesn't shed any blood. The type that could also be described as self-sabotage.

As I go along the (cliche alert) journey I'm currently working through, I'm realising just how often I've acted in a self-sabotaging way when it comes to my relationships. It seems that all I ever do is get involved with people that I can never 'have', not that you really ever have anyone, but the term works for the sake of argument, which inevitably results in my getting hurt.

Amongst many others, there was Elliot, who once told me mid-way through having sex in the back of my Ford Fiesta that I wasn't allowed to tell my friend we'd hooked up. James who I was in love with for over 6 years, who would pop in and out of my life whenever he wanted, telling me he loved me before getting yet another girlfriend. Dan, who was a shit show from start to finish and Alex.

AKA period blood guy, we all know how that ended.

My point is that, for the most part, all of the relationships I've ever been involved with have been with people that didn't want me. Being a commitmentphobe of epic proportions who refused to get close to someone for fear of them leaving, I always assumed this was a good idea. I thought that their behaviour and actions perfectly suited what I wanted, when in fact anyone they should be shouting from the rooftops that they have me in their lives.

I'm realising more and more that it's not just my razor blades that cause me harm, but my thoughts and actions towards myself as well. By allowing myself to get close to these people, those who don't even have the slightest intention of caring for me, I'm in turn hurting myself because I know I will get hurt in the long run. I know these situations can't last and, if I'm honest, I don't really know how many of them I wanted to work out. Take James for instance, we could never have been together, we just weren't compatible in that way, but that doesn't mean I didn't love him, that I couldn't stand the idea of him not being in my life. Letting go of him was hard, and even now I have days where I miss him, but I know that he wasn't good for me, know that moving on was the right thing to do.

Plus I think Hannah would have bitch slapped me if I left her any more voice notes telling her how much I loved and missed him. She even pulled the best friend card on that one and you know it's serious when that bad boy comes out.

There's so much more I need to work on with this and I know I can't work on everything at one time. But if there's ever something that needs to be dealt with before I even think of being with another person, it's this.