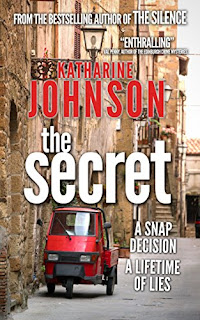 This will be the third book tour I'm taking part in, and I'm still really enjoying them. Instead of writing my own review, I've been sent a guest post by Kathrine Johnson, author of The Secret. Here's what she had to say about writing about different countries. 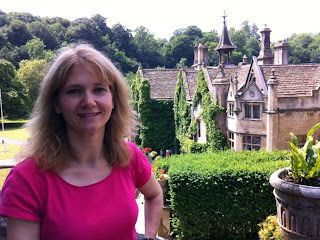 As a reader, I’m often drawn to books set in other countries. I love to feel transported somewhere different, whether it’s revisiting a place I’ve been to or discovering more about one I haven’t.
In some ways having an exotic location can be a gift for the writer.
But when I decided to set two of my books in Italy I found it also presented a number of challenges.

Make sure it’s accurate
How realistically can you depict a country that’s not your own? I worried about this quite a lot as I’m not Italian so what qualified me to write about it?
On the other hand, I think sometimes it helps to be an outsider because you observe things in a different way, noticing things that people who are used to their surroundings might not notice. Also, I love history and it was the wartime history of Tuscany that drew me to writing The Secret, sparked by conversations I had with locals but backed up by a lot of reading.
If you’re going to mention real places you need to make sure readers who know these well won’t be able to catch you out on things like how long it takes to walk from the station to the cathedral or what scenery you pass on your way from the airport. If you haven’t been or can’t remember it’s worth asking in an online group.
I’ve spent quite a lot of time in Italy and have had a home in the Lucca province for 15 years. We spend as much time there as we can and always speak Italian with our neighbours.
For me, it helped that The Silence and The Secret which has just been published (June 2018) are both set in a fictional village. While Santa Zita isn’t based on any single real location it’s inspired by many of the mountain villages close to my home. I’ve taken lots of photos and videos when exploring and made notes to help me with descriptions later for my fictional village.
But even then you have to be careful to remember where things are – you can’t have buildings moving about. I sketched a map of the village with the bar, restaurant, school, church, different characters’ homes and Villa Leonida so I could remember where they were.
What if you haven’t been to the country? I’ve read books written by people who’ve never been to the location they write about or who’ve only been for a short holiday but are nonetheless totally convincing. I think this is partly because of the strength of the story but must also be due to research. We’re very lucky these days to be able to do so much research online. Watching videos and old film clips can also be very helpful.

Too much description
But how much description should you include? How do you bring the setting alive without making the story sound like a guidebook? I’m sure there are lots of different views on this and it’s impossible to please everyone. People read for different reasons – some buy a book because of its location whereas others are more interested in the story and are less interested in where it’s set.
My feeling is that a book that’s marketed for its setting can carry a bit more description than usual but the really hard thing is making it feel incidental. An early draft of the opening for The Secret which I had critiqued had too much exposition so I’ve cut this down as much as I could and tried to convey the setting in a few words here and there to anchor a scene rather than long passages which take people out of the story.

Get the language right
We’ve probably all winced at a wrongly spelled word or inaccurate foreign phrase in a novel. Apart from looking unprofessional, it undermines the reader’s confidence in the storyteller. If you don’t know a native speaker to check your language you’re sure to find one in an online writers or readers group.
But how many foreign words should you include? This is another really hard one because if you use too much it can just look like you’re showing off and put off readers who don’t have time to look up a translation. Some readers would also feel patronized if translations were given for words they consider obvious so it’s worth testing these out on friends. I decided to use foreign words such as ‘piazza’ and ‘gelateria’ which are easily understood and give a sense of place but keep the Italian speech to a minimum.
Something I find it quite odd as a reader is when a character delivers a speech in perfect English and ends with si? As though they wouldn’t know such a basic word as ‘yes’.
And then there’s the foreign accent – do you need it? Again people will have different opinions but as a reader, I don’t generally like accents to be written down – I’d rather imagine them myself. While an Italian speakinga likea thees might work in a funny book or scene, it can sound a bit ridiculous or even offensive in a more serious story which is why I decided against using accents in my books.

Avoiding cultural clichés
Another difficult line to tread – you want to make your book feel real and you want to give your readers a flavour of the country but without resorting to stereotypes, which might even appear racist.
So there are dozens of potential hazards to avoid when writing about another country but I’ve really enjoyed writing about the secrets of Villa Leonida and I hope people enjoy reading about them. 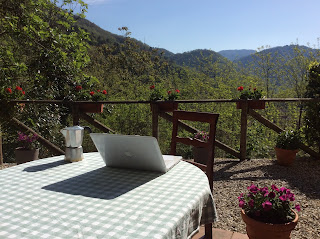 ***
You can find Katherine and her books here: