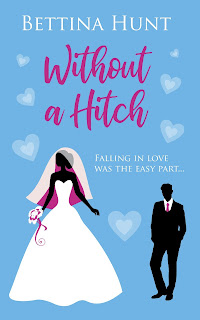 Ironically, I read Without a Hitch by Bettina Hunt on the day of the Royal wedding. Always one for a bit of trashy chick, lit I devoured it in one sitting while sunbathing through a window on my friend's bed.

The general plot revolves around three women who are getting married. One of them is a stereotypical career woman, one is portrayed as a bit of a brat and one has a baby and a fiance that her mother can't stand. So far, not much out of the ordinary.

Now, I love a chick lit, but a chick lit with a storyline. I don't care if it's running off to Vegas and outing a famous heartthrob or reading a million emails back and forth from HR rep and a man babysitting a Great Dane, I adore it.

The problem with the storylines in this book is that they weren't substantial enough for me to get involved in. Yes, we get that the three women are getting married, and have three very different lives, but that's it. I wanted to know more. There is a thinly veiled attempt at constructing a meaty plotline, but nothing overly enticing.  There were suggestions, but nothing interesting enough to get me hooked.

Bride number one was so stereotypical it hurt and did nothing to remind people that being a bride doesn't necessarily make you a diva.  The second was better, but once again cliche (I'm sorry but there needs to be a law banning books that go for the 'follow your heart or your head' bs, it's over). The third was my favourite, and an entire novel could have been written around her, but instead, we got three half stories that are loosely joined together by a wedding chat room.

As a whole, the book is good, and a perfect beach read for when you want to flick through a few pages in the sun. The thing is, it's been done, a hundred times over. When you write chick lit, you need to stretch further than the traditional gets-everything-she-wants bride or the career woman torn between her heart and her head. The final couple has slightly more depth, but one out of three does not a great book make. Not something I'd pick up again, but not terrible either.