Random things that piss me the fuck off 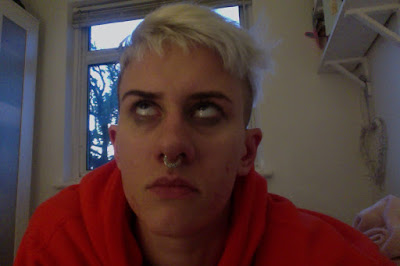 I'm late on a blog post, but I'm knackered and cranky, so ranting is as much as my brain can handle.

I have a short temper, this is true, but I manage to get by most days without screaming at anyone. There are things, however, that simply push me over the edge and lead me into an all-consuming rage that can only be cured my innumerable amounts of swearing and repeated use of the word cunt. At this present moment, they are the following...

There's a woman in Southend who likes to sit on the high street and, for reasons that I'll never understand, play the ukelele. Now whilst I'm sure she's a lovely person, every time I see her I want to whoop her upside the head with her stupid pygmy guitar. Is she a gnome? No. THEN WHY IS SHE PLAYING AN INSTRUMENT SIZED FOR ONE? As far as I'm concerned there is absolutely no use for the ukelele, other than to beat someone to death for playing the ukelele.

Now let me make it clear that I'm in no way knocking the work service animals do, they're fucking amazing and far more beneficial to society than I will ever be. What I'm talking about are emotional support animals outside of the realms of man's best friend.

Aside from the obvious, such as wanting to know who's plumbing is sound enough to flush a hamster, I have a big BIG issue with this. Stop being such a fucktard, you don't have an emotional support peacock, or a hamster, or a goat or a toad or any other random ass animal someone may choose, YOU JUST HAVE A PET. Stop fucking whining and leave them at home. And if you don't want to be without them, stay at home. It's a perfectly simple remedy, and and I don't have to damage my brain by subjecting it to such bs whenever I check my FB news feed.

People who claim to be afraid of small holes

One of the first conversations I had with my landlady's son was about this, and I went off on one to such a degree that he immediately told me I needed to eat something, that's how bad my hangries were. But that doesn't mean my beliefs don't stand true.

THERE IS NO SUCH THING AS BEING AFRAID OF SMALL HOLES. Sweet mother fucking baby Korean Jesus! There are people in the world whose homes are being destroyed by war and you claim to be frightened of a picture of a hole? Sure they may make you feel uncomfortable, but there are lots of things that make people uncomfortable. I, for instance, am made uncomfortable by your all consuming stupidity, so move along, suck it up and be quiet. I have shit to do.

and, of course, Cat Dealy.